A Brief History of the Prairie Township Fire Department

The township consists of approximately 20 square miles and serves roughly 18,000 residents. in 2019. PTFD took 5,338 total runs, 73% of which were EMS, and 27% were fire. Station 241 in the east took over 87% of the total runs, which matches our population density. There were 6 structure fires in Prairie Township last year.

The area we cover is roughly bordered by I-70 from the north to Johnson road to the south, and from the east at I-270, to the Madison County line (Big Darby Creek) to the west.

1944- The Township took over the Fire Department and increased its man power to 15 volunteers. The volunteers were paid $1.00 an hour for fighting fire.

1947- The Township passed a bond issue to build a fire house. The station was built at 23 Maple Dr. and currently houses the township administration offices. That same year, the trustees signed a protection agreement with Pleasant Township to cover their township with fire protection at a rate of $40.00 per run.

1948- Following a tragic drowning, the firefighters purchased a resuscitator and a used ambulance for $800.00. After first-aid training, Prairie Township put its first emergency squad in service.

1954- The Firefighters put their money together and bought a new Ford panel truck. The men cut the truck in two an extended the frame and created the townships first modern emergency squad. This truck stayed in service until 1961 and took more that 2000 runs. The Prairie Township Firefighter’s association Fish Fry helped pay for the truck.

1963- The Township purchased 5 acres on Norton Road It was first used for a training area and the Firefighters Annual Fish Fry.

1965- The Township hired its first fulltime firefighter, Louis Scheiderer, for a whopping $460.00 per month. At this time the fire department had grown to 32 volunteers, one full-time firefighter and a Fire Chief.

1968- In May, the firehouse was expanded for the arrival of a 75’ Snorkel aerial apparatus. The cost of the Snorkel was $67,000 and was purchased mainly because of the six story Doctors Hospital West.

1969- In February, the Township purchased an ambulance from Horton Emergency Vehicles for the cost of $955. This was the first emergency vehicle Horton constructed and is still on display in their Grove City offices.

1971- A training tower was built on the 5 acre lot at Norton Road Prairie Township became one of only two, State Certified training schools in the state of Ohio. The second was located at Bowling Green State University. Many classes were held at the Prairie Township Fire Department and many firefighters were trained here until 1978 when the state built the "Ohio Fire Academy" in Reynoldsburg.

1972- Chief John R. Richards issued a fire chiefs order for Beacon Towers to reduce the buildings to two stories and meet all fire and building codes, or tear them down and remove all material from the premises. Altogether there were twenty-three building code violations. Both buildings were nearly completed and one was nearly ready for occupancy. These buildings would later be known as "Toothpick Towers".

1976- In January 1976, after many hearings, the Court of Common Pleas ordered the razing of the structures to begin. The demolition began in May of that year. There had been approximately three million dollars invested in the two buildings. This story gained national attention in the January 1978 issue of Fire Engineering magazine.

1978- The Township built its third fire station in Lake Darby at 451 Hubbard Road, which is now station 243. Also that year the Fire Department saw its first two men to paramedic school. By the year 1998 all full-time members had completed and maintained training as paramedics.

1980- In October, following his retirement earlier that year Chief John R. Richards was awarded the State of Ohio Distinguished Fire Service award for untiring devotion in his fight against the Beacon Towers apartments. He was the first recipient of this renowned award that is still given annually to this day.

1983- The Fire Department had 13 full time paid firefighters and 28 volunteers. The firefighters purchased a set of airbags. Also in 1983 the department bought its first computer for record keeping.

1985- The fire department expanded, providing 24 hour fire and EMS services with the addition of 7 new employees.

1997- Station 243 was remodeled to its current configuration and was manned 24 hours a day with three firefighters. In recent years, it was increased to four firefighters who cover E-243 or M-243 and Station Car 243, depending on staffing for that day.

1998-Constructed the training tower that now exists at 123 Inah with monies donated by local Fire Departments and businesses for the use of our department and surrounding agencies.

1999-Became the first Department to have all Full-time personnel as Paramedics.

2000- Station 241 took delivery of its first ladder truck, a 75’ E-One Quint replacing Snorkel-241. This truck is still in service and is capable of being used in replacement of an OOS engine due to its attack lines and onboard water supply.

2004- On September 12th, Prairie Township experienced a tremendous loss of life at a fire in the Lincoln Park West Apartments. Unfortunately 10 victims perished at that fire which was deemed to be set fire by an arsonist. The fire was investigated by the Prairie Township Fire Department investigators as well as the State Fire Marshal, ATF, and the FBI. There were no arrests made in regards to this case.

2005- Station 243 placed E243 in service. E243 was equipped for a compressed air foam system (A) and was the first of its kind in Prairie. Today both front line engines are equipped with CAFS systems and on board foam tanks.

2007- A fourth person was added to station 243. This allows E243 to respond with a crew of four firefighters and allows a station car to be staffed for the purpose of a first responder when M243 is tied up on other emergencies.

2011- The position of Fire Marshal was created to handle fire prevention and investigations. This brings our current full-time staff level to 28 members.

Dedicated new E-241 Pierce Impel with CAFS at a cost of $525,000 and Updated our rescue tools with Genesis system and Kodiak Struts.

2014-2017- The Prairie Township Fire Department laid out a program with a mission of offering every single family household within Prairie Township an opportunity to have a working smoke detector. November 2017 our mission was accomplished. During this program, firefighters knocked on 5,400 homes and were able to assist 1,484 of those homes with either new smoke alarms or batteries for currently working alarms.

2017- In house dispatching located at Station 241 was disbanded due to the increased financial demand caused by a need for new and updated equipment and technology. Prairie Township is now partnered with the City of Grove City for our dispatching needs. Along with Prairie Township, Grove City dispatches for Jackson and Pleasant Township fire departments as well as Grove City Police.

2018 - Station 241 completed a renovation project and hired full-time Administrative Assistant and IT roles in its front office. The Department changed systems for its fire/EMS reporting to a technology that is being used throughout the country for continuity and ease of communication. They also resoundingly passed a levy for continued services and new equipment.

2019 - As Prairie Township celebrates their bicentennial, PTFD celebrates 75 Years, and is honored by the Ohio House of Representatives and Senate for its legacy at the 70th Annual Fish Fry & Friday Cruise-In. As a result of last year’s levy, a new Medic 241 went into service. In December, Chief Chris Snyder left his service and Assistant Chief Allen Scott became our new Chief.

2022 - Fire Marshal Rick Critchfield retired in November 2022 after serving over forty-two years to the community. Firefighter Matt Powers was promoted as the newest Fire Marshal for the Prairie Township Fire Department

In October 2022, the Board of Trustees approved the 2021 Staffing for Adequate Fire and Emergency Response (SAFER) Grant totaling $3,033,647.00. This grant covers salaries and benefits for 9 additional full-time firefighter/medics for a minimum of 3 years. These 9 firefighters will begin in January 2023. 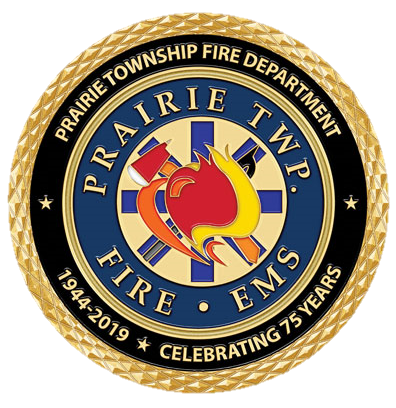